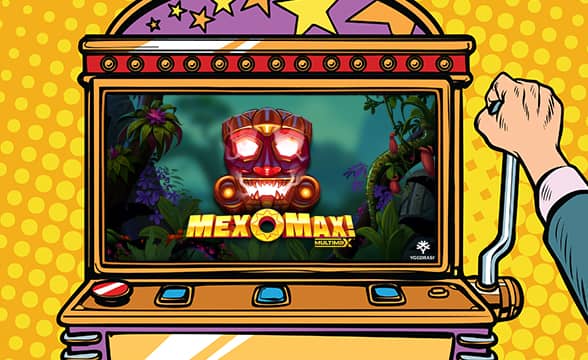 Multi-award-winning game provider Yggdrasil has released yet another exciting slot part of its prestigious MultiMax series. The new game has the Aztec jungle theme in place and it is packed with free spins, wilds, Golden Bets, and two bonus buy options.

Yggdrasil’s slots are known for having a number of special features and bonuses. Each of them comes with its own mechanics, including Gigablox, Splitz, and MultiMax. These mechanics have customized payout potentials and characteristics. The MultiMax mechanic leads players to excellent Win Multipliers. The multiplier effect works by instantly compounding all multipliers. This means x2 and x4 multipliers lead to an x8 payout. The same is true for the fresh MexoMax slot, the provider’s third title to incorporate the same feature, following Crystal Falls and Multilfly!

As expected, MexoMax! MultiMax is also powered by GATI, the company’s advanced technology that lets partners use preconfigured game development kits to generate top-tier content that can be quickly distributed.

The game encourages brave adventurers to jump on an exciting Mayan quest and enter the fascinating Aztec jungle to scoop up big wins. The game features a cluster pays mechanic whenever a minimum of five symbols are linked together. Each column has a multiplier that can trigger huge wins. Every win can be subject to as many as six multipliers.

Wild symbols popping after each new win trigger cascading wins with multipliers hitting impressive levels. Seven nine, nine, or 11 free spins can be triggered whenever between three and five free spins symbols show up on the reels. Treasure Chest symbols can also pop up randomly. If this occurs during the base game, players get free spins, between five and 100x their initial bet, plus four wilds. If the same Treasure chest lands during the free spins round, players get between five and 100x the bet, one free spins, and one multiplier +1 on all reels along with four wild symbols. The Golden Bet feature lets players increase their bet by 50% in order to double the chance to hit the bonus game.

Yggdrasil’s head of product and programs Stuart McCarthy spoke about the company’s “rich history of releasing truly engaging slots” with the Game Engagement Mechanic (GEM) mechanics. He added that the fresh release makes no exception, describing it as a “strong entry in the series” and also a game that players will fall for. At the end of July, Yggdrasil and Relax released Dublin Up DoubleMAX, a slot with a pop-and-drop cascade, and the Doublemax GEM.