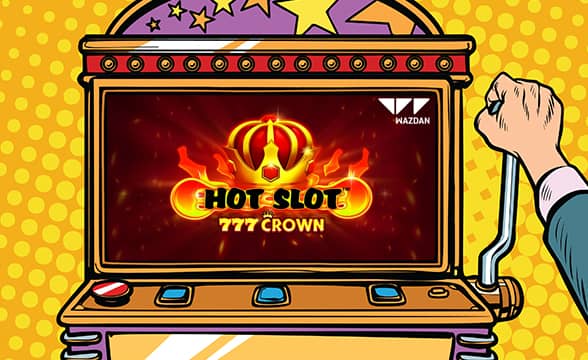 Popular gaming studio with cutting-edge iGaming solutions Wazdan has launched Hot Slot: 777 Crown, an exciting title for retro slots aficionados. The game is a real gem for nostalgic players eager to go back in time and claim their shiny crown.

If you are a nostalgic retro slot game player looking for a fresh title in 2022, Wazdan’s new release is one of the top choices to consider. The developer’s chief commercial officer Andrzej Hyla described Hot Slot: 777 Crown as a game that plans to bring back glimpses of the beloved retro slot genre that brought the studio a lot of fans in the past.

Hot Slot: 777 Crown was released on April 12 and it also addresses brand new players eager to enjoy flawless design and smooth and straightforward gameplay. The game comes with a Return To Player rate of around 96.47%, counts 20 win lines, and mixes a classic design featuring fruit symbols like melons, grapes, and plums.

Players can select the normal, fast speed, and ultra-fast speed modes to save time and keep spinning reels for a big win that could reach up to 305x the original bet. The game also features a series of adjustable features that belong to the developer’s proprietary customizable features, including the adjustable Volatility Levels feature.

This feature allows players and operators to freely tweak the game’s volatility during gameplay using the three available options: standard, high, and low. This means players and operators alike will be more in control of their experiences online and play according to their personal preferences, which could range from one game to the next.

The game counts 5 reels and 4 rows, seven regular symbols, and a special scatter symbol. No matter where it lands, the scatter symbol enables players to claim their crown and trigger wins up to 305x their original bet. Regular winnings are paid for hitting combinations of the same symbols on the active line, from left to right.

The basic game is fairly exciting to play when there are no additional features activated. However, when the scatters and special features and symbols reveal themselves on the screen, the game suddenly becomes more exciting.

The game does not have a bonus game, multipliers, or any free spins, but it does feature the autoplay option for simplified gameplay. The minimum bet is $0.20 while the maximum bet can go high as $10000.
Wazdan’s Hot Slot 777 Crown slot is excellent for players who enjoy classic, retro-style game elements and it is expected to enrich the developer’s lineup of hit games.

In mid-January, Wazdan signed a partnership with Scientific Games, agreeing to provide it with a number of its successful titles, including Relic Hunters, Black Horse Deluxe, Burning Stars 3, and Power of Gods: the Pantheon, Relic Hunters, or Sizzling 777 Deluxe. Last August, the supplier partnered with Twin Casino, an operator based in Malta. The developer is expected to launch additional games as the year progresses.