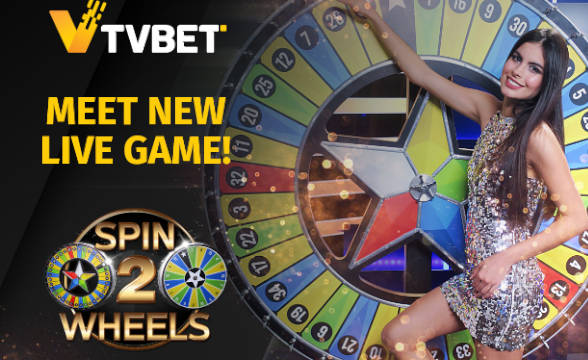 The latest addition to TVBET’s exciting portfolio of live games, Spin2Wheels, features two wheels of fortune spinning in opposite directions, offering combined bets on two independent events at once and hence, increased winnings for those whose wagers are correct.

Both wheels are divided into equal sections – 36 in the first wheel and 18 in the second – and each section is numbered and colored: colors vary between blue, green, yellow, and red, while on each wheel there is a special section marked with a star that is colored in black.

Both wheels start spinning at the same time in opposite directions and randomly stop to determine the result of the spin while the TV presenter announces the sector numbers and colors from both wheels.

The game offers wagers on the numbers drawn, color, range, and even/odd numbers while providing bettors with a chance to boost their winning odds by combining outcomes from both wheels. Wagers can be placed on both the upcoming spin and future spins before each spin.

With a promise for excitement and captivation, the new live lottery game Spin2Wheels also offers players up to three jackpots. The game expanded TVBET’s portfolio of live games broadcast round the clock from a single studio in Warsaw, Poland.

The new game launch is the latest development related to TVBET’s expansion since its inception by a group of iGaming experts brought together in 2016 by Peter Korpusenko, TVBET’s founder and CEO.

TVBET experienced a busy month of April: at the beginning of the month, it launched Polish Poker, a live poker game specially adapted for Polish players, then featured on ICE London 2022, and ended the month by signing an agreement with GoBet to expand its presence in Poland.

TVBET’s portfolio of live games is currently streamed in Europe, CIS, Africa, Latin America, and Asia by more than 170 partners and over 400 websites as the company continued to grow, boasting offices in Poland, Ukraine, Lithuania, Cyprus, and Russia and over 200 employees.