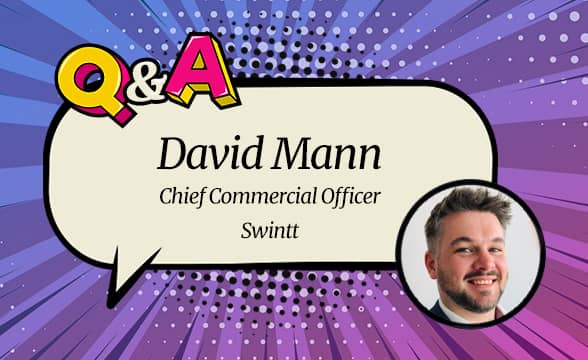 We sat down with Swintt CCO David Mann to talk about Swintt’s recent launch in the regulated Dutch gaming market, the company’s philosophy of driving innovation and creating brand new mechanics, and the outlook for regulated markets in Europe and beyond this year. David walked us through Swinnt’s constantly-improving portfolio and what goes into crafting player-favorite titles, and not least The Crown slot which is expected to be a hit at Fair Play Casino in the Netherlands.

Q: Swintt has had an excellent product line of titles since its establishment, releasing innovative games like The Crown and Mystic Bear XtraHoldTM as well as classic Premium releases such as Extra Win X, Master of Books, and recently launched Del Fruit and Lucky Jimmy. Can you tell us a little about how these games resonated with audiences and if players enjoyed them?

A: Yeah, it’s been a pretty exciting time for us! Dealing with the games you mention in order, The Crown was obviously the first piece of branded content to come out of our studio and we think having Vinnie Jones on board for that made a real impression with players.

Mystic Bear XtraHoldTM has also been very well-received because of its innovative new XtraHoldTM mechanic. When this feature is activated, prize symbols and their values lock in place as a series of respins are triggered, with this creating potentially huge cumulative wins.

Finally, games like Extra Win X, Master of Books, Del Fruit, and Lucky Jimmy have proved incredibly popular with players in the German market, which we’re also taking as a good omen for our Netherlands launch. Based on our research, the two markets have a lot in common in terms of player preferences, so we’re expecting our Premium games to also do really well there too.

Q: That’s a pretty good segue to talking a bit more about the regulated Dutch market and what your expectations are there. Swintt games are now certified and ready to enter the Netherlands and you’re just waiting on a few integrations being finalized before they go live. Do you think Dutch players are going to like what they find?

A: As I touched on at the end of the previous answer, all of the market research and trends suggest that Dutch players have very similar tastes to German players when it comes to slots.

In Germany, our games are extremely popular because we bring a lot of well-known titles from land-based casinos into the online world. That makes them instantly familiar to players, who are accustomed to seeing things like traditional fruit symbols, BAR logos, and liberty bells.

In the Netherlands, the range of the land-based slot titles is very similar to Germany, and since the regulated online gaming is relatively new, it’s the same story. Many players are already used to the colorful slots with simple game mechanics that you’d find at a land-based casino, and that’s exactly the audience our Premium portfolio of games caters for. A range of our games have a long history within the Dutch land-based market and we are delighted to see operators interested to capitalize on this and help aid both the acquisition and retention of players by offering the games they know, love, and trust. We’re hoping to satisfy these traditional players while introducing something new in our Select slots as well.

Q: In terms of trying something new, what is it that drives your development philosophy these days? Recently we’ve seen games with cinematic storylines, games that introduce new bonus mechanics and games that are altogether more traditional. Out of plot, visuals, and gameplay, what would you say is the driving factor when producing a new Swintt release?

A: There’s no one main focus – I’d say it’s a combination of all of those things. When we develop a title, we’re always trying to target as wide an audience as possible and cater to many different types of players. Because of that, we’re constantly experimenting with games that have different themes, volatility levels and maximum payouts to see what works best.

In general, we’re just trying to make sure that we bring something different to the market every time we release a game. That’s why the innovative Xtra series of slots has become such a big part of our brand. Within that, we’ve got XtraWaysTM, XtraLockTM, XtraHoldTM, and XtraStreakTM, each of which provides a completely unique gameplay experience for players.

Of course, our upcoming release, Candy Gold, will also introduce a range of new concepts to players. The slot is the first in the Swintt line-up to use a cluster pays mechanic and include cascading wins. This makes it look and play like a modern mobile game, with an extra level of engagement being added by the fact players can earn or buy power-ups to boost their wins.

To ensure creativity and diversity across our portfolio we are also onboarding new studio partners under our SwinttStudios project, where we work with game studios who just want to create amazing content and see it live across the industry. Swintt handles the technical support, RGS, compliance, and commercial elements while we let the creative minds and developers produce the games.

Q: With your entire portfolio of games about to go live in the Netherlands, just how important are regulated iGaming markets in Europe to Swintt’s expansion plans for 2022?

A: Regulated markets – particularly those in Europe – are at the heart of Swintt’s strategy going forward. Our games are now ready for the Dutch market and will be making their online debut very shortly, but we’re not stopping there. We’re already looking into acquiring certificates for Lithuania and licenses for both the UK and Romania, and we expect to have our games available there later this year as well.

Beyond Europe, we are focused on entering the North American markets next year, likely beginning with Ontario before moving across the United States markets. With legislation taking place on a state-by-state basis, we’re seeing many new jurisdictions welcome online casino gaming and that’s something we definitely want to be a part of soon.

Q: What are your big predictions for the future of the online gaming industry in 2022?

A: I think the first thing to say is that I expect we’ll see a phenomenal level of industry growth over the coming months. Given the Netherlands and the various regulated states in North America are so new, they’ll certainly expand and mature during 2022 as operators figure out exactly what customers are looking for. This will in turn lead to many more game mechanics being developed as player tastes and preferences evolve and further markets become available.

Additionally, I think responsible gaming is going to be even more of a hot topic than it already is. It’s something regulators in the industry are measuring more and more these days and operators are having to be increasingly smart about enforcing it. I think with this being a major focus area for casino businesses, we’ll probably see a lot of innovation in this sphere in 2022.