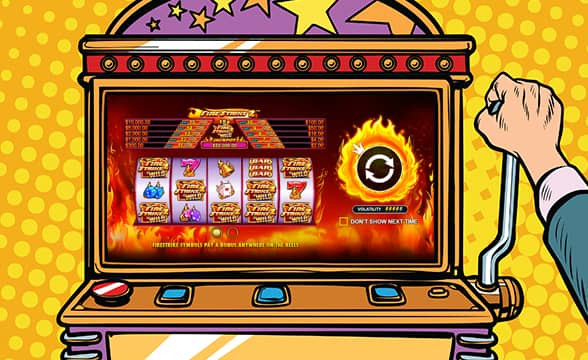 Top content provider Pragmatic Play has made a resounding comeback with Fire Strike 2, a modern take on a classic slot that fans of techno soundtracks and crisp graphics are going to love. The game is a sequel to Fire Strike launched in 2019 and features simple mechanics, while packed with instant money prizes and a 25,000x jackpot.

Lightning doesn’t strike the same place twice, but no one said anything about fire. Pragmatic Play decided to give fans of their beloved Fire Strike slot a treat by launching a spiced-up sequel. The game carries all the standard fruit machine elements and hot flame décor from the first game, while also bringing in some fresh elements to the table. The new game is now dripping with free spins and a brand new sticky symbol that will keep players hooked in the fast-paced mechanics.

Pragmatic Play has kept the burning dice symbols from the first version of the game, along with the chips, playing cards symbols, bells, and banknotes. The same low-paying symbols have been used to complete the fruity theme of the slot. The Fire Strike symbol along with the lucky sevens colored differently represent the high valued symbols within the new game.

Besides the addition of new symbols, the developer also decided to bring the graphics up a notch, giving the game a vibrant and crisp look that will steal all the attention. The daring visuals go well with the amazing audio. The lounge-like funk music in the first game was replaced with music that will remind you of a themed house party in the nineties.

Once the grid gets covered by 15 Fire Strike Wilds, the player will trigger the jackpot worth 25,000x the bet. Once the diamond scatter symbols simultaneously land on reels one, three, and five, the player triggers the Free Spins feature. This is a feature that will generously offer an instant 2x win from the bet, along with 12 free spins.

In the bonus round, a player who lands at least five Fire Strike symbols triggers cool instant cash prizes and multipliers. Landing three scatters in the bonus round also triggers 12 more free spins.

The company’s chief business development officer Yossi Barzely believes the game has an “impressive win potential” along with generous jackpots, setting it up for becoming a staple of their already amazing portfolio. At the beginning of May, Pragmatic Play announced it would launch a Stake.com branded live casino studio, while still busy putting in time and effort into its successful live casino products.