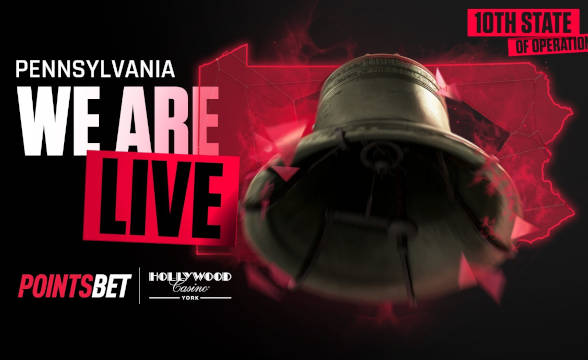 Casino, sports betting and technology company PointsBet will launch its offerings in yet another state, following approval by Pennsylvania’s gambling regulator.

After meeting the standards of the Pennsylvania Gaming Control Board, PointsBet was approved to launch in the Keystone State. As per the agreement with the local authority, the operator will precede its full-scale launch with a two-day soft launch period. After that, the company will be allowed to freely run business in the state.

This mirrors the recent launch of PointsBet’s online sports betting offerings in the state – just like now, the company was required to begin with a small-scale launch, before making its full offerings available to all bettors in the state.

Manjit Gombra Singh, president of technology for PointsBet, spoke about the launch. According to him, now is “an exciting time” for the online casino market as it provides crucial opportunities to operators. Because of this, Singh said that PointsBet is proud to be able to maintain its momentum and capitalize on the opportunities in iGaming in an additional state.

Singh added that his company is working hard on improving and expanding its online casino offerings. He explained that the operator hopes to refine its suite of products by the end of 2022 and deliver more options to those who have chosen to wager with PointsBet.

Expanding across the iGaming sector has been one of PointsBet’s main goals in the last few months. The company currently operates online casino offerings in the states of Michigan, New Jersey and West Virginia. In late March 2022, the operator was officially approved by the Alcohol and Gaming Commission and launched its offerings in Ontario, once the Canadian province launched regulated online gambling.

Some companies struggle to survive in the competitive online betting market but PointsBet seems to be doing just fine. Its clever tactics and the successful promotion of its brand have helped the company to improve its business and see a noticeable increase in its revenues. In February, the operator released its results for the first half of the fiscal year, demonstrating a 27% year-on-year growth.

While the online casino sector is one of PointsBet’s key points of interest, the company continues to maintain its sports betting audience engaged as well. In March, the operator teamed up with Playmaker to launch promotional March Madness content and engage the sports betting audience. Right after that, PointsBet announced a new partnership with the Ottawa Redblacks team from the Canadian Football League.