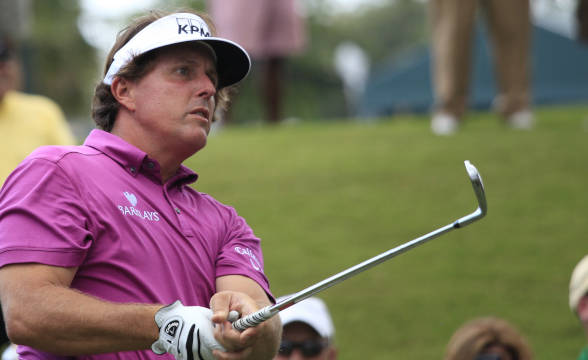 Phil Mickelson is just one of the many athletes to have a soft spot for gambling. However, the latest book dedicated to his life and titled “Phil: The Rip-Roaring (and Unauthorized!) Biography of Golf’s Most Colorful Superstar” reveals the true scale of the man’s obsession with gambling He has reportedly lost as much as $40 million and there is proof as all of his losses have been recorded by government auditors.

Golf Legend Mickelson Has a Soft Spot for Gambling

A case of insider trading brought additional regulatory scrutiny which established the man’s fast-and-loose attitude to gambling. Unlike Dana White who has “beating the s**t out of casinos,” or Drake who has been ribbed about the “Drake’s curse,” Mickelson’s losses are serious.

Mickelson’s association with Billy Walters, a professional gambler accused and sentenced for inside trading, put a dent in his reputation and for a brief while – threatened legal proceedings against him. However, Mickelson was ultimately not charged but Walters ended up being fined $10 million and jailed for five years.

The golfer, though, seemed confident in his ability to enter high-stake games and make hefty wagers. According to the biographer and renowned golf journalist, Alan Shipnuck, Mickelson was earning at least $40 million a year, making his losses in comparison not that significant. His expenses were also significant, Shipnuck argued.

Mickelson would need around $30 million to cover his living standards a year, leaving him with some $10 million and the author says that it’s what Mickelson averaged on annual gambling losses. There is a good chance, the author argues, for Mickelson to have been left in the red or to have been able to just break even. Then came the winless years from 2014 through 2017.

Around this time, Mickelson also sought to distinguish himself from the PGA Tour and help get started a rival league hosted by Saudi Arabia. According to Shipnuck, Mickelson’s absence from PGA Tour events made him bent on taking discrete revenge on the organization.

Overall, Mickelson is one of the most prolific gamblers on the PGA Tour, and even though he has not been talking much about this in public, this new biographic account sheds light on just how much the golfer was into gambling. He’s hardly the only high-profile athlete to have shown interest in the activity, but certainly, one of the “biggest losers” when it comes to taking his luck on games of chance.