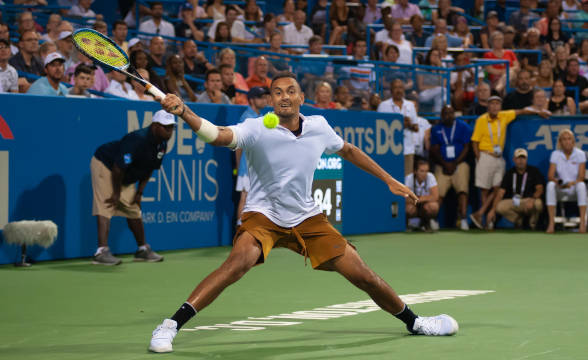 Believe it or not, Rafael Nadal (ATP no. 4) is the underdog in the 2022 Wimbledon semifinal against Nick Kyrgios (ATP no. 40). The reason behind this is that the Spanish GOAT candidate is reportedly struggling with an abdominal injury which could force him to pull out of the tournament.

The Australian player is having the time of his life. He’s just reached his first semifinal in Grand Slam tournaments after destroying Cristian Garin 3-0 in the quarterfinal in a match that lasted just two hours and 15 minutes.

It was a fantastic display by Kyrgios, but that wasn’t his most dominant performance in this tournament. We saw him destroy Filip Krajinovic in straight sets in under two hours. Still, Kyrgios’ most impressive performance happened in Round 3 against favored Stefanos Tsitsipas, whom he defeated 3-1.

Although he did slay a couple of giants already, he still hasn’t played against such a strong opponent as Rafael Nadal in this tournament. However, he did play many times against the Spaniard, beating him four times in ten matches.

Rafael Nadal Still Not Sure Whether He’ll Play

It’s still unclear whether Rafa Nadal will continue playing in the 2022 Wimbledon. The thing is that he’s reportedly struggling with a painful abdominal injury which caused him a lot of problems in the quarterfinal match with Taylor Fritz.

The match in question lasted for four hours and 20 minutes, with Nadal winning the fifth set after a tiebreaker. The player with the most Grand Slam trophies in his collection had to take a medical timeout at one point, with his dad asking him to abandon the match. He didn’t listen to his father’s advice, which proved to be the right thing to do.

Nadal did triumph in the semifinal, but the question is whether he can handle another brutal match?

This is going to be a very difficult match for Nadal, but we think he will pull it off. It’s not going to be the first time that Nadal wins while having an injury problem – the same happened several times this season.