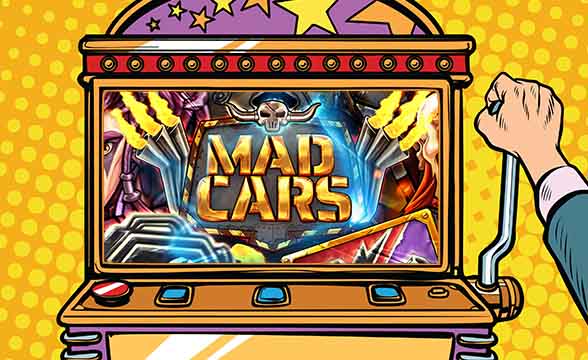 Push Gaming, a supplier of online and mobile games to the betting and gaming industry, recently released a new slots title. The new game is called Mad Cars and will allow players to become a part of a post-apocalyptic car race.

Enter a World of Speed

Fans of flamboyant post-apocalyptic media are sure to love the new title. Slots enthusiasts can play Mad Cars with all of Push Gaming’s partners and become part of the action.

Taking a look at what Mad Cars has to offer, the 5×6 reels game will take players on a journey in the far future. Gamers will strive to collect various symbols such as wrenches, destroyed traffic cones, car wheels and last but not least, characters. Different combinations will yield players various prizes, allowing them to keep the action going.

Lucky players can earn free spins during various stages of the game. During the base game, rare car symbols summon a car. Each spin determines how much a car would move forward. Once it reaches the top of the reels, the car will award players with cash and free spins. This can also activate the bonus game.

During the Mad Bonus game, five cars will race to the top of the game’s reels. Various bonuses and events will determine how much every single car will affect the overall multiplier. Once a car reaches the finish line, it will affect the multiplier and bring extra value to the player.

At the beginning of the bonus game, players will have seven free spins. Each spin will determine which and how many cars would move forward. Each car that reaches the end will also award an extra free spin to the player. Players can also earn a bonus that equips one of the cars with a turret. The latter will power the other vehicles’ multiplier bonus at the end of each turn. Alternatively, a car can get a magnet, in which case its own multiplier will go up with each round.

Players can enter the bonus game by paying. At the end of the bonus round, players may get the mad race bonus feature that pays out every car left in the race regardless of its position.

Push Gaming Is Happy with Its New Title

The post-apocalyptic aesthetic is something rather new for Push Gaming, which is known for its less serious and dynamic titles. However, it shows that the developer is able to make games for various audiences and meet the needs of all of its players.

Push Gaming’s chief executive, James Marshall, is happy with how the new game turned out. He believes Mad Cars to be an unparalleled title that is sure to engage enthusiasts of the post-apocalyptic genre. In addition, he is sure that the game’s intricate mechanics will keep players at the edge of their seats.