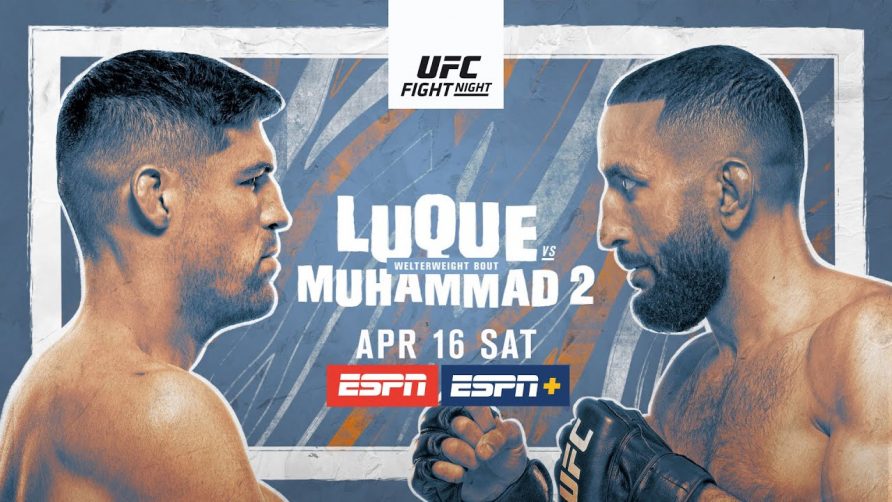 The Ultimate Fighting Championship is back in Vegas. UFC Apex in Enterprise is the place where the event titled UFC on ESPN 34 will take place on Saturday, April 16.

The headliner of the event is the rematch of the Vicente Luque vs Belal Muhammad fight, some five and a half years after their first clash. Their first duel was won by Luque and bookmakers think he’s going to do it again.

All odds are per FanDuel as of April 12.

Luque to Continue His Spree?

Vicente Luque is 21-7 in his professional MMA career, with most of those wins happening in the UFC, which he joined back in 2015. Thanks to his impressive portfolio, Luque got himself a place very high in the UFC Welterweight Rankings. Ahead of the UFC on ESPN 34 event, he’s #4 in the rankings, with a chance of going up in the near future.

The last time he lost a fight was in late 2019 when Stephen Thompson beat him by decision. Oddsmakers don’t think he’ll add another defeat to his tally, at least not this weekend. Instead, they think he’ll deal with his old foe without any problems.

Can Belal Muhammad Upset the Odds?

Online sportsbooks don’t think that Muhammad can cause a big surprise on Saturday, but this guy did cause some upsets in his career. For example, in his most recent fight, Belal beat Stephen Thompson by decision.

It was the 20th win of his career, while he also has three losses, as well as one no contest. This explains why he’s ranked high in the UFC. Right now, he’s in the #5 place in the UFC Welterweight Rankings, just one spot below his next opponent.

With a win over Luque, Belal would be able to leapfrog him in the rankings. The trouble is that Luque seems like the kind of fighter Belal hates fighting. Luque is fantastic on the ground, while Belal isn’t. Evidence of this is that Luque has eight wins by submission in his career, while Muhammad has just one.