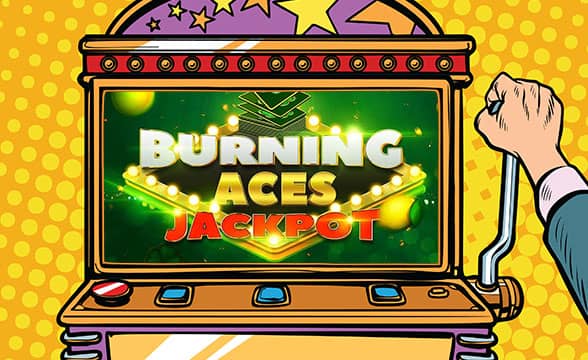 Award-winning online gaming creator Evoplay has released a progressive jackpot sequel to its already popular slot Burning Aces launched in May. The name of the new Las Vegas-themed slot is Burning Aces. Jackpot. The slot looks extremely promising thanks to the Spinential game engine it relies on and the progressive jackpot games that the studio has thrown the focus on.

Visit Sin City and Get Lost in the Hypnotic Gameplay

Burning Aces. Jackpot comes with the same colorful online slot hall with a mesmerizing design found in the original game. Players are drawn in by the vibrant slot machine with neon colors and eye-grabbing symbols representing good luck. The symbols range from clovers, cherries, bells, fruits that twinkle, and bells. When forming a winning combination, players see it buried in flames, just about to burst into a shower of coins on the screen.

The new slot also features wild symbols that only make an appearance on the second, third, and fourth reels. Wilds replace the rest of the symbols with the exception of scatters. When a winning combo includes wilds, it expands to cover all positions on the respective reel.

Scatters can form winning combos no matter what their position on the reels might be. The

Diamond Scatter can show up anywhere on the reels, while the Star Scatter symbol can pop up on the first, third, and fifth reels.

Every jackpot game level is presented in the form of a card suit, ranging from diamonds for the first level, clubs for the second level, hearts for the third level, and spades for the fourth level. Once a game is completed and the player has finished gathering the winnings, the jackpot game can be triggered randomly. The greater players’ qualifying bets during the base game, the higher the odds of landing a Jackpot game and collecting one of the fourth available jackpots.

Evoplay’s chief executive officer Ivan Kravchuk spoke about the new game, expressing the studio’s excitement to “offer another fantastic slot” to their loyal player base. In mid-July,