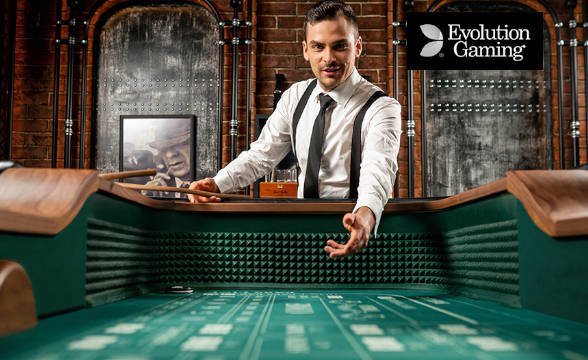 Evolution has announced a new product launch with the company going live with its Live Craps product in Pennsylvania, marking the latest successful content rollout in the US market. The Keystone State is one of the biggest iGaming markets in the United States presently, making the arrival of fresh content a particularly auspicious development for the company.

The new game is streamed from a speakeasy era-inspired studio and adds to the atmosphere that sets the tone and pace for the popular live casino title. Craps offers entertaining and recreational gameplay to both more experienced players as well as newcomers.

The game features a special “Easy Mode” which is set to make the onboarding experience easier and includes an interactive online tutorial that explains the game to players who are completely new to it. Craps are an important driver of interest and gameplay activity, even though it has a relatively steeper edge compared to other table games.

Regardless, Evolution has felt strongly about the prospects of its Live Craps title in the United States. The game was first introduced in Europe and has now pivoted towards the US market. Apart from the Pennsylvania launch, Evolution is similarly preparing to add the title to Michigan and New Jersey, two of the most significant iGaming markets in the United States presently.

Commenting on this opportunity Evolution commercial director for North America Jeff Millar welcomed the chance to bring the bespoke Live Craps product to yet another important market for the company and explained the significance of the product itself:

This game was the very first online Live Craps game in the industry, and it was a landmark moment for Evolution. We’re very proud to be able to offer it to our operators and their players in the state of Pennsylvania today.

Miller argued that Craps enthusiasts across the US will have the opportunity to experience an outstanding product that will appeal to existing player bases but also help attract new people who are keen to check out the “decadence of the speakeasy era.” Evolution is now looking forward to the reception of its product and what customers will think of it.

In the meantime, Evolution has been busy in Europe and the United States. The company launched its fourth Live Casino studio dedicated to the Connecticut market. The company also teamed up with Holland Casino and introduced the Gold Bar Roulette product.