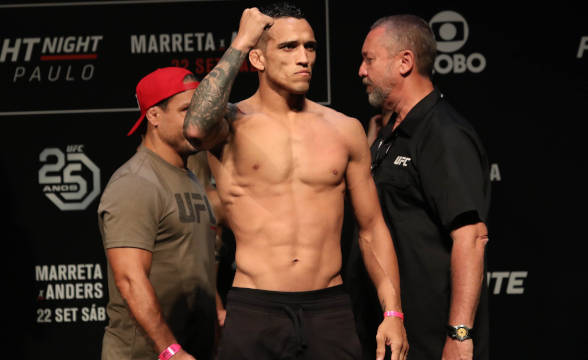 The UFC is coming to Arizona this weekend with one of the most exciting events in recent months. The event in question is UFC 247, headlined by a UFC Lightweight title bout between Charles Oliveira (champion) and Justin Gaethje.

The fight itself is exciting enough to make people obsess with UFC 274, but that’s not the only barnburner on the program this Saturday. We’re going to witness another title bout, as well as another three exciting main card bouts.

In this post, however, we’re going to focus on the headliner fight – Charles Oliveira vs Justin Gaethje.

All odds are per FanDuel as of May 3.

May 15, 2021, was when Charles Oliveira got ahold of the championship belt. He won the vacant UFC Lightweight Championship title after beating Bellator MMA legend Michael Chandler. He did it by technical knockout (punches), thus breaking the UFC record for most career finishes (17).

Oliveira’s first title defense happened some seven months later when he fought Dustin Poirier. He won again, this time by submission. By doing that, he broke another UFC record. He became the fighter with the most submission wins in the history of the promotion.

Oliveira has 15 submission wins in the UFC, while his total record is 20, showing that he’s an absolute grappling king. Are we going to see him win another fight by submission? Although he’s great in that aspect, his next opponent is great at defending against submissions.

Getting on the floor with Oliveira is a recipe for disaster. That’s why Gaethje will probably want to stay on his feet for as much as possible. The good news is that even if the two get on the floor, Gaethje might be capable of stopping his opponent from submitting him. It’s because he has a grappling pedigree, having been a successful wrestler during his college days.

However, since turning pro, Gaethje hasn’t been putting his wrestling knowledge to use too much. At least, not offensively. The evidence of this is that he’s won only one of his UFC fights by submission.

That said, a huge majority of his wins happened by knockout. In fact, 19 of his 23 MMA victories happened by this method.

Oliveira is one of the best fighters in the lightweight division in the history of the UFC. That explains why oddsmakers see him as the favorite to win on Saturday. However, Gaethje is a smart fighter, who’s got plenty of weapons at his disposal. If there’s someone who could defeat Oliveira, it’s Gaethje.