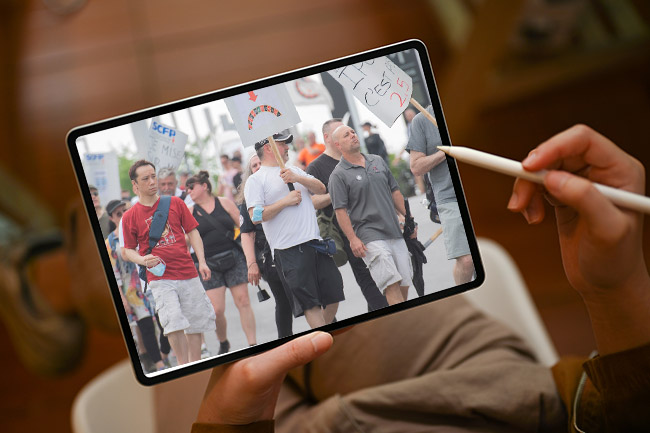 Casino Montréal continues to be troubled by issues, as management informs that its croupiers are still on a strike. The strike started more than a week ago, and staff members are still displeased with the state of the negotiations between Loto-Québec and the Canadian Union of Public Employees. The union says the casino has lost profits to the equivalent of what the croupiers are demanding. The strike officially began on Saturday, May 21, 2022, and the casino’s 521 croupiers are represented by the Canadian Union of Public Employees or CUPE. According to the union, the previous collective agreement expired on April 1, 2020, and since then the workers have been left out without one, and there has been no progress in contract discussions. On Saturday, Loto-Québec announced that despite the continuing strike at the casino property, it is still up and running. Gaming tables, dining amenities, slow machines, and live shows, are operational, while the poker room remains shut down. Prior to that, the Crown corporation issued a statement that expressed its disappointment with the strike, as the last two years were quite tedious for the casino.

Since the emergence of the unprecedented situation, the casino has been closed down and reopened numerous times. For instance, last December, Quebec again shut down gaming amenities across the province. It was not until the end of February 2022, that the casino was allowed to reopen its doors. Then in March, the property removed some of its health and safety protocols, thus bringing it closer to normal.

CUPE union consultant Jean-Pierre Proulx commented that the Montreal casino brings tons of funds into the public coffers that cover health and education services. He commented that the union wants to continue to do its part and provide money for the budget, but staff members cannot do it at the expense of their health. The union stated that currently, the employer does not want to pay 15 minutes of break time.

Employees are asking for 30 minutes of paid breaks for each hour worked, due to an alleged increase of physical issues from their shifts. However, the Crown agency responded that it has not noticed a bump in such health problems. In addition to that, the union also accuses the Crown of wanting to pay new recruits at 90% of the lowest salary scale.

In response to that, the Crown commented that the entry-level salary is more than 20% of the current market one. The employer stated that it wants a responsible negotiated agreement, and hinting those negotiations should have similar parameters to what has been agreed upon by the same CUPE-affiliated employment entities across its other casinos such as Casino Lac-Leamy.

Back in January this year, the Lac Leamy Casino staff members and Loto-Québec reached an agreement on a new collective agreement. CUPE 3892 which represents 300 employees of the property successfully negotiated improved conditions for its members. The new terms award a wage increase of 2% for 2020, as well as 3% for 2021 and 2022 respectively, a 2.5% rise for 2023, and 2% for 2024.