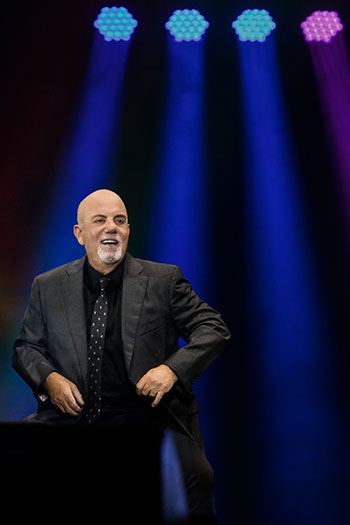 New York’s quintessential son, Billy Joel, is one of the greatest musicians of our time. Joel ranks as one of the most popular recording artists and respected entertainers in history. The singer, songwriter and composer is the sixth-best-selling recording artist of all time and the third-best-selling solo artist. Joel’s songs have acted as personal and cultural touchstones for millions of people across five decades.

Joel is one of the biggest concert draws in the world, selling out arenas and stadiums across the globe with songs like “Uptown Girl,” “Just The Way You Are,” “The Longest Time” and “Vienna,” among others. In 2016, the Library of Congress selected “Piano Man” for preservation in the National Recording Registry for its “cultural, historic, and artistic significance.”

Joel is also the recipient of six Grammy Awards, including the prestigious Grammy Legend Award. Joel has received the RIAA’s Diamond Award twice for “Greatest Hits Volume I & Volume II” and “The Stranger.” Joel has been inducted into the Songwriters Hall of Fame, the Rock & Roll Hall of Fame, and has received numerous industry awards including a Tony Award for Movin’ Out, a Broadway musical based on Joel’s music.

Joel has also performed alongside other music greats at two of Madison Square Garden’s most extraordinary benefit concerts: “12-12-12, The Concert For Sandy Relief,” which raised awareness and money for those affected by Hurricane Sandy; and “The Concert for New York City,” which was held to help aid 9/11 victims and heroes.

Tickets cost $105–$405 and are available at www.myhrl.com. Doors open one hour prior to show time. Additional fees may apply.