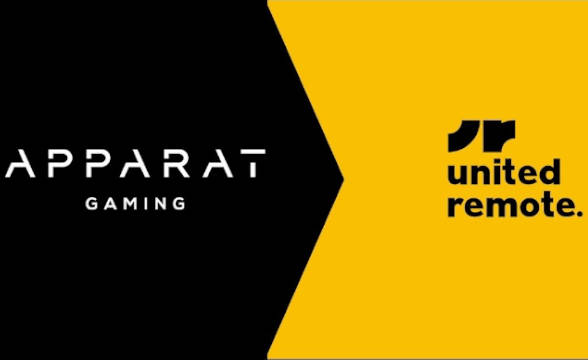 Apparat Gaming, a slot developer with a major focus on the German market, has signed its first content aggregator deal and thanks to this development, its whole game portfolio will be distributed by United Remote. With this deal, Apparat Gaming is looking to expand its market reach and open the door to more operators.

The Partnership Resulted in Two Slot Releases in 2021

With the help of the MGA-licensed developer, Apparat Gaming managed to release its first two games back in 2021 – Fruit Storm and Pharaoh Princess. Since then, Apparat managed to apply and be approved for a Malta Gaming Authority license and now, the developer is looking to launch its slot games across multiple jurisdictions with the help of United Remote.

United Remote managed to become one of the industry’s leading developers, aggregators and game platforms as this company works with multiple reputable B2C and B2B brands. All of these brands will be able to enjoy Apparat Gaming’s releases, including Total Eclipse, a classic slot game that has the famous Hold-and-Respin feature which adds to the overall pleasing gaming experience.

Apparat Gaming’s director and co-founder, Thomas Wendt, shared his thoughts on the partnership. He said that Apparat Gaming has been working with United Remote for several months and since the two parties have had a fruitful relationship, it “made sense to join forces” and crown them as Apparat Gaming’s first aggregator partner.

Wendt acknowledged the fact that United Remote works with numerous reputable brands and stated that it will be great to see Apparat Gaming’s portfolio being featured at these brands.

Eliana Mennonna, United Remote’s product manager, stated that United Remote is always looking to add quality content to its portfolio and that is exactly what Apparat Gaming delivers. She went on to praise the uniqueness of Apparat Gaming’s titles and put an emphasis on the fact that they have a German accent. Mennonna ended by saying that this partnership will benefit both parties, but the biggest winners from the deal will be the players.

About Apparat Gaming and United Remote

Apparat Gaming is an iGaming developer that puts major emphasis on German games. Apart from United Remote, its partners include Pariplay, Lionline, iTech Labs, as well as one additional recent signing – GoGaming.

At the moment, Apparat Gaming has 3 slot titles under its belt – Total Eclipse, Fruit Storm and Pharaoh Princess. It is also working on a new release called 40 Sevens, which is set to debut soon.

On the other hand, United Remote is an innovative platform and development studio, whose services include game development, platform games aggregator, as well as B2B services. Because its foundation is based on user feedback, it always makes sure to steer its goals towards the needs of its customers. United Remote’s HQ address is at 14 East, Level 3, Triq Tas-Sliema, Gzira GZR1639, Malta and its license number is MGA/B2B/283/2014, which was issued on August 1, 2018. Throughout the years, the company signed deals with numerous other reputable brands apart from Apparat Gaming, one of which is Push Gaming.