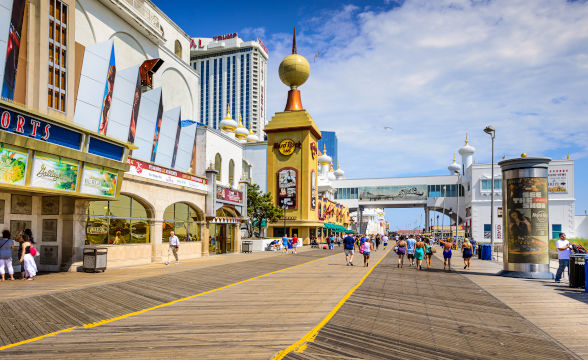 Four casinos in Atlantic City, New Jersey, have been fined for allowing unidentified people (including minors) to wager since 2019. The casinos were fined five times in total and asked to forfeit their winnings.

The casino which turned out to be the least diligent is Tropicana Atlantic City. In November 2021, the venue allowed 40 bettors who either didn’t provide identification or were self-excluded from gambling to play. Because of this, Tropicana had to part with almost $59,860.

Harrah’s Resort Atlantic City had also neglected its responsibilities in 2019 by allowing seven people to gamble without checking their identities. Luckily, one of the gamblers later provided an ID, which helped the casino keep some of its revenues and forfeit only $4,622.

Caesars Atlantic City Hotel & Casino is an example of a venue that didn’t learn its lesson and got fined two times. The first was back in November 2021 when 20 minors were allowed to bet $901 (which Caesars was later forced to forfeit). Another fine was imposed this February after Caesars didn’t properly check the identities of seven bettors, resulting in the forfeiture of $1,632.

The last fine in recent years was imposed on Hard Rock Hotel & Casino Atlantic City, which allowed 30 minors to play in February. The venue had to forfeit the $1,632 it won after breaking the rules.

Improper ID Checks Are Not Anything New

The aforementioned transgressions are not something new to the industry. Casinos in New Jersey often surreptitiously avoid certain rules, forcing the New Jersey Division of Gaming Enforcement to work overtime. An article by New Jersey Online Gambling assessed which casinos have broken the rules the most.

While Borgata Hotel Casino & Spa, one of the most influential venues in Atlantic City, isn’t on the list above, it is known as the biggest offender in the state. The casino has previously received a total of eleven fines and has had to forfeit a whopping total of $95,803.

Caesars is also a long-time offender with eight more fines behind its back and has had to forfeit a total of $57,073. Bally’s Casino is also missing from the list above but is known to have been fined five times, forfeiting a total of $34,319.

Harrah’s has a record of three previous violations, leading to the forfeiture of $18,861.  Tropicana has two other recorded cases, excluding the one mentioned above, when it didn’t comply with the local regulations and was forced to part with $15,945 of winnings.

Hard Rock is not that far behind the two names above. Four previous transgressions have resulted in the casino forfeiting $14,947.

Ocean Casino Resort has one violation, valued at $10,659. Resorts Casino Hotel has also a single fine where it had to forfeit $4,105.  Golden Nugget Hotel & Casino is a rare case of a venue that didn’t break the rules a single time in the last few years.

In other news, Atlantic City’s casinos seem to be recovering from the pandemic. Recent figures demonstrated that the gambling venues have surpassed their pre-COVID revenues. As the industry recovers, more and more people keep on demanding a smoking ban in the city’s casinos.